Recruiting for MBA jobs starts really fast! If you’re lucky enough to get into business school, it won’t be long before the management consultants start swooping upon you.

But getting a job post MBA isn’t easy. The better your MBA, the better your competition for each spot, so you’re going to need to stand out from the crowd. In this Make Mondays Better, Angela Guido talks MBA recruitment tips, how it all works, and how to get ahead of your business school peers so you can get the best post-MBA job for you.

BUT ALSO: Sign up for our FREE COURSE on MBA Recruiting and join the YOMO waitlist here. 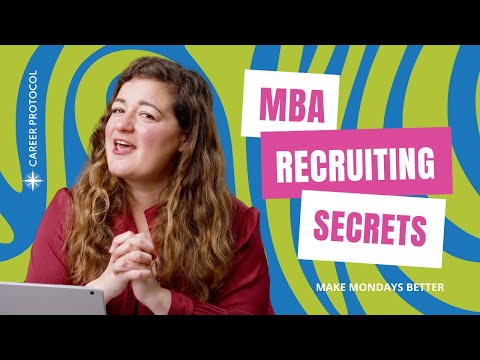 If you got into business school this year, I'm going to answer a question that is on your mind: How to get a job post MBA? Today's Make Mondays Better video is about preparing efficiently for MBA recruiting because it's coming for you and it's coming fast. I'm Angela Guido, the founder of Career Protocol, a former Recruiter of MBA at the Boston Consulting Group, a former Management Consultant, and a former HR Manager at KPMG. For the last 15 years, I've been a Career and MBA Coach, helping people achieve their potential and maximize the joy in their career, and that's what I'm here to talk to you about today. So, if you’re one of the lucky few who got into business school this year and you are about to launch the next phase of your career, I hope you are excited for MBA recruiting. It is one of the biggest benefits of the MBA, but it’s also one of the biggest challenges. Most of our clients say that Imposter Syndrome is never higher than when they’re in business school. And that’s for the simple reason that now, to get the job that you want after business school, you're competing with all the people who won the MBA admissions game. You're competing with all the other people who are as awesome or possibly even awesomer than you are to get the job that you want coming out of business school. I'm here to help on Make Mondays Better.

In my first video, I talked about why your post-MBA job is so important. If you haven't watched that video, please check it out right now. It's right there. In my second video, I talked about the three biggest industries that MBAs go into and how those industries are going to be recruiting first. So you're going to have to make up your mind if you want to go into consulting, banking, tech, or something else. But now I'm going to talk about how MBA recruiting actually works. I'm going to give you a little bit of an insight into the dynamics of MBA recruiting and share with you the two things that you have to do to get your post-MBA job.

So on most MBA campuses, MBA recruiting starts almost immediately. The longest time you're going to have to just goof off and be a student and get used to your new life is about six or seven weeks. From that point forward, and possibly much sooner, companies are going to come to campus and host events to get to know you. You're going to have to be ready to present yourself to recruiters in a cohesive and competent way almost from day one. It's a little-known secret and it's something that almost nobody tells you about. You do not have a lot of time to explore in business school. You're going to have to make up your mind really quickly because you have to present yourself to recruiters from the beginning, and you have to look good because they're evaluating you at every step of the way.

Networking Happens For A Long Time

There's a whole window of time where you're only going to be networking. Interviews tend to start in the winter for summer internships at full-time programs, and they start early in the fall of your second year for full-time jobs. But until that time, you're just going to be networking. You're going to be meeting companies, asking good questions, getting to know them, and then eventually you're going to — hopefully — get invited to interview. So, getting your post-MBA job is really simple. It's the simplest job search you will ever do. There are only two steps.

Acing the interview is a subject that we talk about a lot on this channel. I've got lots more videos coming your way about interview skills and how to crush any interview, including a post-MBA recruiting interview, but today I'm going to talk about that first step, which is getting invited to interview. Now, every campus manages interview invitations a little bit differently. For some companies, on some campuses, the only way to interview with them as an MBA student is if they invite you. And if they don't give you the invitation, you just don't get a chance. You don't get to talk to those firms. You will not be considered for internships or full-time jobs. On other campuses, and for some different companies, there's a mix. So there's what we call the closed list. At BCG, we invite a certain number of people on most MBA campuses to interview, and for those people who are not invited to what we call the closed list, they can still bid for a chance to interview on the open list. So even if you're not invited, you can still maybe interview with firms of your choice. And then there are other firms where it's only an open list and they only interview people who request to be interviewed and who sign up for the open list.

Get Invited To Interview

So that first step of getting invited to interview is critically important. That's going to happen because

As they're getting to know you through the networking process, they've determined that you are a fit for their firm. They feel like you're the kind of person that they would enjoy working with. So your most important job during MBA recruiting is to build connections with the companies that you're interested in and build genuine friendships with the people you meet so that there is someone behind closed doors at the company that you want to work for saying, we need to invite this guy or gal to interview with us because they're our type of person. That's the first and most important step in your recruiting journey is to get the interview invitation. Now, given that MBA recruiting starts so fast and interview spots are so competitive, ironically, the higher the caliber of your MBA program, the more competitive recruiting is going to be. If you're at Harvard, you are only competing with other Harvard students and if you hope to stand out from that crowd, there's a lot that you're going to have to do between now and interview invitations and then post-interview invitation through the interview stage to earn the offer that you really want in MBA recruiting.

Set Yourself Up For Success

Fortunately, I've put together a MasterClass with my “Top Secrets of MBA Recruiting” to help you navigate this challenge and prepare to make the most of your MBA career pivot. Sign up for the free Masterclass and then consider joining YOMO, our annual MBA recruiting program called You Only MBA Once. It leverages everything I've learned as a recruiter of MBAs and as a coach of MBAs, helping them get the job that they really want post MBA, to enable you to make the most of this pivot and truly maximize the return on your MBA investment. We've done YOMO almost every year for the past several years and all of our students love it. They say it takes them from totally clueless to totally prepared to get the job that they want. All of them succeeded in getting a post-MBA job that set them up for long-term success. I really hope you'll check it out I hope you'll consider joining me for this year's, YOMO, it's going to be a blast and it's going to really help you get the job that you want post MBA. At Career Protocol we are all about helping our clients and our entire audience maximize the impact and joy that they're able to achieve in their career. So if you've got into business school this year, congratulations, I am rooting for you to get everything that you want out of your career. I'll see you next time on Make Mondays Better.