It’s time to learn about Stanford’s unique one year program, but how is it different to a regular MBA or an executive MBA? Angela Guido is joined again by Vijay to talk about Stanford MSx’s curriculum, class profile and how to approach the Stanford MSx application. 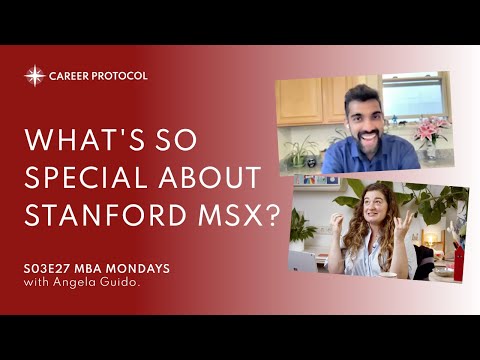 Actually, a one-year MBA with a lesser opportunity cost than almost anything else. It's not an executive MBA. It's not a part-time MBA. It's a full-time, immersive program.

Hello, and welcome back to MBA Monday! I'm Angela Guido, the founder of Career Protocol, and today we are talking about Stanford GSB MSx. We have with us a very distinguished guest, Vijay Raghunathan, a former Career Protocol client and Career Protocol Senior Instructor and Career Coach and Stanford MSx alum. Say hello, Vijay!

Vijay: Hello! Hey, Angela. I mean, I'm sure you were practicing my name 100 times last night! Wow, that’s just like how my mom calls me. So anyway, lovely to be here. Thanks so much for having me here.

Angela: Vijay and I go way back when we were working together on his application to Stanford MSx, but I'm so happy to have you here with our YouTube audience today so that you can explain to us what is so great, so special, so unique about the Stanford MSx program. I know you have just a million things to say about the program, but why don't you just start by telling us what is the greatest value that you got out of that program?

Vijay: Angela, let me tell you this. How often do you go to a party where there's a hostage negotiator from Singapore, a high school principal from Ohio, an executive from Boeing, and a lawyer who has worked with Kim Kardashian on a lawsuit in the same party? That's the MSx program, right? The famous way I explained MSx to my MBA colleagues is, in your first job before you came to Stanford, if you were hired by Person A, the people who hired Person A are usually the MSx people. So they are mid-career executives who have a ton of experience, who come to this program to make a change, to grow both professionally and personally.

Angela: And so thinking about what makes the MSx program distinct from all the other MBA programs we talk about on this channel and the Stanford full-time MBA in particular, Vijay points to the most important thing, which is that it's for people who are slightly more senior than the full-time MBAs, but still people who are looking to actually make a pivot. It's totally different from other executive MBA programs because it's one year, it's full time, and when you're done, you're jet-propelled off into a new career, not necessarily the one that you started the program doing. That makes it really unique among all the other graduate schools of business programming. And so, Vijay, tell us specifically, what did you love the most about the program? It's always great to hear it from the mouths of people who have lived and breathed the culture and been there. What was most valuable about the experience for you?

Vijay: I would definitely say two things. Top two things. The first thing, it's a 60% international cohort, and the cohort itself is a smaller size compared to the MBA. It's about between 85 and 100 people which means by the time you leave the program, you know each and every person in the year that you spent. So that's very valuable. I feel one of the biggest assets of going to a business school and spending one year there is you want a community after that. And so, in the MSx you form closer bonds and that is phenomenal. And second, as I said, being international, the caliber of executives, of people who come to the program with diverse ideas, is just so wonderful. And you see that manifest in the class discussions, which are definitely at a much more mature level. There were failed CEOs in my company, there were failed actors in my company, there was a very successful advertisement agency consultant who comes from an ad business, family business. So, people who come with such rich experiences from not just the US, from around the world, it makes the quality of discussions and the quality of learnings going through case studies or projects so much richer that I don't think you will find in many other places. So, if I have to summarize that, I would say it's the international community and the ideas that come along with that. And the second, I would say it's the cohort sizing itself. You form stronger bonds and that helps you after you graduate from Stanford.

Angela: Amazing. So we frequently talk about the benefits of the MBA network. Your friends, your colleagues and collaborators that are going to follow you throughout the rest of your career, and it sounds like Stanford MSx has got some special sauce on that front. So, another question I have for you, Vijay, is as people are thinking about applying to Stanford, the full-time MBA versus MSx, who should really be looking at MSx instead of the full-time MBA and what do they need to know about the application process to really be successful?

Vijay: So I think the people, if I have to give you an example in the sense in my class, 25% of the people who came into my cohort were director-level and that goes along with an average class experience of ten years or more. So people who have had at least ten years in the industry working, have made some good career progressions but now have hit a wall, who really want to explore both their personal leadership style and professional career choices going forward — pivoters, as they call it. I think those are the people who really are seeking a challenge, who really are seeking like a pit stop in your life where you're refueling, you're taking some time to think, explore. So those are the kinds of people who should really think about the MSx. And I would also say people who should not be thinking about the MSx are people just looking to make a career progression. Usually, people like that who come with that expectation leave a bit disappointed. People just coming in seeking jobs with higher salaries usually leave disappointed. Now to your second question. There is nothing different in the application process between the MBA and MSx, and I'll tell you two reasons why. One, the adcom is the same adcom. It used to be actually different. Now, as of two years ago, it's all one adcom. The questions are the same. They look for the same exact values and you spend so much time with the MBA students, except for the first quarter, the only difference between the MSx and the MBA, once you get into the GSB, it's just two quarters less. And you spend all your time in classes with MBA students, doing projects with MBA students. So after you get in, there's almost no difference. So that's why I would say there is almost no difference in what they’re looking for or what you should be communicating in the application.

Angela: So is there anything else you want to say about Stanford MSx and your experience there, Vijay?

Vijay: So if you're a person who wants to grow, who wants to break the monotony of life after working for eight to ten years, I think Stanford MSx is a program that you should be seriously looking at. As I said before, it's like the secret Starbucks menu. Not many people know about the program. It's one of the programs that's old 60 years so you can imagine the quality and the wealth of information that this program has and the community is such a strong community. So, if you're somebody who's looking to grow professionally and personally, if you're somebody who really wants to be part of the Stanford ecosystem and you missed an opportunity when you were 25 years old, here's a second chance. Life and Stanford are giving you a second chance, just go grab it. Don't wait for it. The ROI is 10X, so go for it.

Angela: Are you considering applying to Stanford? Is Stanford your dream school? Do you think MSx might be right for you? Then you should probably work with Vijay on your applications. You can sign up for a free MBA strategy consultation by clicking this link. I know that Vijay would love to talk to you about Stanford, about your MBA goals, and about working together to achieve your MBA dreams.

Oh, Canada! Discover 5 reasons to consider completing your MBA in the Great White North, including flexibility of acceptance criteria and great recruiting opportunities.

What makes the MIT Sloan program so unique? Find out in this episode of #MBAMonday with Angela! Get tips for your application and stand out to the adcoms.

Learn how you could expand your global perspective at INSEAD on this episode of #MBAMonday with our Chief International Officer, Charli – plus tips for your application!