Should you get an MBA or Executive MBA? An EMBA might sound like a ‘90s online MBA, but the Executive MBA has a very specific function and you’re going to want to know what that is before starting any applications.

But what a surprise! In this week’s MBA Monday, Angela Guido lets you know exactly what an Executive MBA is, who should get an Executive MBA and even get into the program of your choice. She'll explain how EMBA and MBA admissions are different and your secrets to EMBA success in this video. You’ll be ready to decide if an EMBA is right for you in no time! 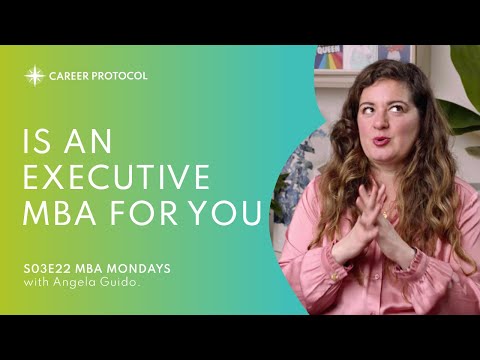 First big difference is that on average, the students in an executive MBA program are, well, executives. They're more senior in their career than people who go to full-time programs. This typically means they're chronologically older as well. So most executive MBAs are in their late 30s, early 40s, could be later, could be earlier, but the chronological age is not the main thing. The main thing is that executive MBAs are people who've already had really significant experience in their chosen field. So they've been working seven, ten, twelve, even fifteen years, usually within one industry, or possibly they've switched once. They may have even been at the same company that entire time. They are people who've already established a track record and some expertise in their field of choice. That's difference number one versus full-time programs, where people are usually more like four or five years into their career, and maybe they've been in multiple companies and industries in that short amount of time.

2. It’s Not About Changing Career

The second big difference is really related to the first one, which is that most executive MBAs are not trying to make a career switch. This doesn't mean that you can't change jobs after an executive MBA. It just means that it's not really designed for that. The executive MBA, first of all, most people are sponsored by their company, so it's for people who are already winning in their current industry and they want to just take their leadership to the next level without changing jobs. They're going to go get a little bit of extra education in the executive MBA while keeping the jobs that they have and growing within it. That's the template for an executive MBA. So, what this means is that the placement opportunities after an executive MBA are much fewer and much less dynamic. There's much less support for a career transition coming out of an executive MBA than there is coming out of a full-time MBA. For the full time MBA, a big part of what many students are paying for with their MBA is access to recruiting and to the resources and to all the companies who come and recruit on campus and are excited to hire MBAs. That's a big part of the full-time MBA value, and in many cases, also the part-time MBA value. But in an executive MBA, those opportunities are a lot fewer. It doesn't mean you can't change jobs, it just means the program really isn't set up for that. So they're looking for applicants who are pretty much already where they want to be, they're just trying to accelerate their leadership through a little bit more education.

3. Structured For People Who Can’t Take Time Off

The third big difference of executive MBA programs versus full-time programs is the way the program is structured. So most fulltime programs are residential, and as the name suggests, they’re full time. So if you’re going to go to the Booth full-time MBA, you’re going to move to Chicago, you’re going to spend two years there, and you’re going to be living probably somewhere near the Gleacher Center or the Harper Center in Hyde Park or downtown, maybe you’re going to be in Lake View, but you’re going to be somewhere living in Chicago for those two years, and you’re going to be studying full-time. You’re not going to be maintaining a job outside of it because the program is structured to make that almost impossible. An executive MBA, on the other hand, for the most part, is not residential and it’s not full time. Now, there are a few exceptions to this, like the Stanford MSX program, the MIT Sloan Fellows program that are full-time residential executive programs, but these are the exceptions. The average executive MBA program instead consists of a hybrid learning situation where for a week at a time or a few days at a time, you will have to be physically on the campus with your fellow classmates, and then the rest of the time there’s some kind of e-learning or online learning environment that forwards your education while you’re back at your full-time job. But the important thing is that it has different implications for your geography. So, if you’re going to take the Booth executive MBA, for example, you’re either going to need to be in Chicago, London, or Hong Kong multiple times during the two plus years of your program.

Which MBA Is Right For You?

So those are the three biggest differences between full-time and executive MBA programs. And even just understanding those three differences may help you sort yourself into the executive bucket or not. Are you at a place in your career where you've got so much experience in doing something that you intend to continue doing post degree, that if you go to the full-time MBA, you're just too far beyond your classmates to learn a lot in a full-time MBA? If that's the case, then you're going to want to look at an executive MBA. Or are you already in a function that you love and do you want to keep your job? Might your company even sponsor you to go get a little bit of extra education so that you can be a better leader within your organization? Then the executive MBA might be the right choice for you. Similarly, a part-time MBA could also be a good option if you are not quite as far along in your career as the average executive MBA is. And finally, are you in a situation where you know you don't want to make a career change, you just want to keep moving on the trajectory you're on, and you don't want to take time off to go and study, you want to keep growing your career? And again, if you're a little bit more senior, the executive MBA might be the right choice for you. A part-time MBA is another good choice if you don't feel like you're quite experienced enough for the executive MBA and you still want to keep your job while you're studying. An online MBA is another good option if you're in that situation as well.

The Applicant Pool Is Very Different

One last thing I want to say about the difference between executive and full-time admissions is that the applicant pool is very different, and in the case of executive MBA is much smaller. And if you just think about the three differences, it's clear why, right? It's people who have to be able to commute to that city, people who are more senior in their career, and people who are already pretty established and aren't really looking for a change. That's just a smaller group of people than the ones who are applying to full-time programs. This has one bonus implication for you if you find yourself in that category, and that is that while test scores — GMAT, GRE and Executive Assessment — while the test scores do still matter at most top executive MBA programs, they're nowhere near as important and influential on the final outcome as they are for full-time programs. So we have a lot of advice on this channel about the GMAT and the GRE and how to really maximize your test scores. You still need to deal with the test scores, but they likely won't have as much of an impact on the outcome as they would for a full-time program. Regardless of what you choose, the MBA can be a really great career accelerator. If you decide that either a full-time or an executive MBA is right for you, then come back here next week and I will see you again on MBA Monday!