INSEAD is the best MBA program in the world (according to some), so best take notes. Behind INSEAD’s very impressive MBA program are some even more impressive statistics, and Angela Guido is joined by our international expert Charli Taylor to help you know just how impressed to be by the Harvard of Europe.

The MBA program’s a little different, the MBA application process is byzantine, the MBA essays extensive, there’s campuses in like four different countries, but despite (and because!) of all its quirks, INSEAD is a business school that needs to be on your radar. 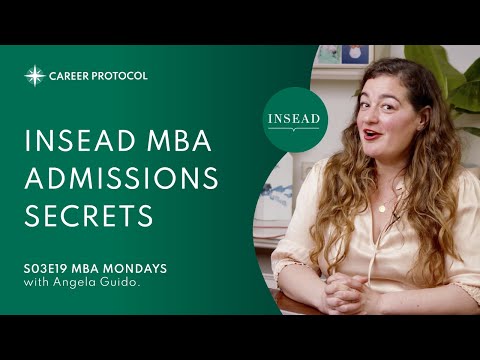 Here we are again. It's Monday, Monday, Monday, and that means it's MBA Monday. I'm Angela Guido, the founder of Career Protocol, an MBA Coach, a Career Coach, and a person who wants you to be successful on your MBA journey. Today we are talking about the second most requested video on our channel. Finally, we're getting into the European Business Schools, and today we're talking about INSEAD with our international expert, Charli Taylor.

Charli: Hey, everyone! Hi, Angela. So great to be here with you this morning. I am so excited to talk about NCAD with you. What an awesome school.

Angela: Charli, why don't we start again with the origin story of INSEAD Business School?

Charli: Yeah, I love the origin stories of these schools because it really demonstrates the vision and also the values, and we want to keep that in mind when you're applying to school and you're thinking about fit. That values fit is just super critical. One of the founders of INSEAD actually had come from Harvard, he had been working at Harvard, and this is again like post World War 2, 1955-ish, or the mid-fifties. Really that exciting time after a very tragic time of rebuilding the world and Europe rebuilding itself, and this was an opportunity they saw to bring Europeans together under the banner of business. And it just mushroomed and proliferated and it is now one of the greatest global business schools on the planet. Some people would argue the greatest. It is just a really incredible school. And so if you think about it like, this is about peacebuilding, it's about collaboration, international collaboration, it's about looking at best practices together and really building something that is strong and enduring and binding on an international level. Very exciting.

Angela: We absolutely love INSEAD Business School. I think we probably send more clients to INSEAD in Europe than any other program and before we get into Charli's tips for you as you're completing INSEAD ‘s marathon essay, treatise, and application form, let's talk a little bit about what's unique and different about the INSEAD program, because there are a ton of great programs in Europe. Last week we talked about London Business School. We didn't even touch on Cambridge, Oxford, Cass (Bayes), Imperial. Those are all in the UK. IMD, IESE, IE — so many great schools in Europe. We could really do a video about all of them, but let's just dig a little bit deeper into INSEAD. Charli, what are a couple of things that really differentiate the INSEAD experience, the INSEAD approach, and the INSEAD MBA from all the other incredible schools in Europe?

Charli: Yeah so, generally speaking, not always, but generally speaking, European MBAs in general are a bit shorter. INSEAD’s is about 10 months to 12 months. But what I think is so fascinating about that, we often say when students are thinking about jumping right, whether they’re jumping function or they’re jumping industry or they’re jumping country, we really encourage people to gain work experience, sometimes doing like a longer MBA is a little bit better. INSEAD is sort of an anomaly here. You have people who want to jump industry, who want to jump function, who want to jump country, and if you're doing all three of those things, you're normally what we call a triple jumper, right? If you're just jumping function, for instance, you're a single jumper. But INSEAD boasts like 80% of their students, even with a shorter duration course, jumps at least sector or function, and 25% of the students are triple jumpers. So those are pretty phenomenal stats for a shorter course. You'll find it in INSEAD also, this is something that I just love about the school, it's so interesting, that they are deeply committed to you having an international experience. So they have some really interesting programs with Kellogg and with Wharton. They have four campuses themselves: the Fontainebleau campus; they have the Singapore campus, of course; and then there's some opportunities to do some work at Abu Dhabi, and now they have the San Francisco campus. So lots of really interesting stuff coming up for INSEAD.

Angela: Yeah. So we always talk about the importance of job placement post MBA as a huge decision factor that you want to keep in mind as you're applying to business school. And on this front for career switchers, including those who want to change function, industry, and geography, INSEAD has really figured out a few crazy secrets. So put it on your short list if you're looking to change radically and move into a new country, especially if you intend or hope to work in either Europe or Asia, and then you're going to go to the Fontainebleau or the Singapore campus because they are uniquely positioned to help you make those moves. I think one of the things I might say is that INSEAD is like one of the most serious schools in terms of job placement being one of the things they care about the most. Which is a huge asset because that's why people are going to visit school.

Charli: Yeah. I had the great pleasure of meeting and working with, in various activities, people from INSEAD and people in the INSEAD career department, and they are formidable and they are serious about their game. But you know why it's so amazing? Angela, one of the things that is really extraordinary about INSEAD and if you want to have an international career, their alumni lean in such a big way and really give the students a hand up. And so once you're admitted into INSEAD, one of the first things that you should do is make sure that you are already reaching out, making those connections with alums. They have alumni connections in over 170 countries, so it's got a huge reach. All of that is there for you to take advantage of. One of the things that I really love about INSEAD is they are totally committed to having the most diverse class possible. Angela they only admit maximum 12% from any one country, so you're not going to have any sort of like, dominant culture. You're going to really be in this incredible blended environment where you get to learn and work with so many interesting people from fabulous, extraordinary, diverse backgrounds.

Angela: Amazing. So for sure, INSEAD should be at the very top of your list if you're looking to expand your global perspective through your MBA and make a radical career pivot. So for those people who fall into that category and are excited about the INSEAD MBA, Charli, give us your number one or maybe even a couple of tips, the application is by far the biggest and the most complex, I think really, of any MBA application, so what is your advice to people applying INSEAD?

Charli: The wonderful thing about INSEAD is they want diversity in their pool, and they want people who have a really interesting, diverse outlook and so how do you do this? Seriously, be authentic. This is like one of those schools that you definitely don't want to just sort of tell them what you think they want to hear. They want to know how you are different and how you are going to bring something so unique to the class. They have an enormous application, and it's for a reason. They genuinely want to get to know you. You will likely be interviewed by two members, two alumni members, or you will be interviewed twice, and that's because they really want to understand you deeply. So be willing to just share openly and share your vision and share your dreams. Again, “Why INSEAD?” is hugely important. They're really conscious that they want people who genuinely want to be at the school, who know how the school is going to help them and they're very thoughtful about kind of weeding out people who are just wanting to go to schools that based on rankings or whatever. So they want you to have really specific reasons for INSEAD. So know the school incredibly, incredibly well.

Angela: That's really good advice for just about any school, but it's especially important for these European schools because they are so distinct. They're distinct from the US programs, and they are distinct from each other. The differentiation really amplifies when you get outside of the US top 10, top 30 programs.

Charli: Well, Angela, I actually think that's such a brilliant point, and you're absolutely right. It's thinking very deeply about how that school is differentiated and why that differentiation point matters to you, why that makes sense for you. So really help them understand that, you know this and also how you want to take advantage of all of the international opportunities at INSEAD. And here's the other thing. What are you going to do with those amazing opportunities? We're living in a crazy world at a crazy time, INSEAD wants to know that you are going to take their degree and just do something extraordinary with it. You are going to change your corner of the world in such a big way, so let them know your vision and show them that you have the gravitas and mysteriousness to make that vision happen, and also the joy and the heart to push you through.

Angela: Amazing advice. Thank you so much. Charli. This was an awesome session. I know our viewers are so excited that we're finally talking about the European schools, but we just couldn't do it without Charli, and you see why.

Charli: Angela, thank you so much. I always love getting to spend time with you, so it was such a wonderful way to spend to spend a rainy Oregon morning. Thanks a lot.

Angela: We'll see you next time on MBA Monday!