Does the GMAT even matter?

Well yes, kind of. Your GMAT or GRE score is absolutely something you want as high as possible for your MBA application. Even if a great GMAT score is not enough to get into business school, a bad score might just keep you out of it.

Angela Guido is here to explain just how the GMAT works in your MBA application, why it is important, why schools care about it and how to work out whether your GMAT score is good enough to get into the MBA program of your dreams. 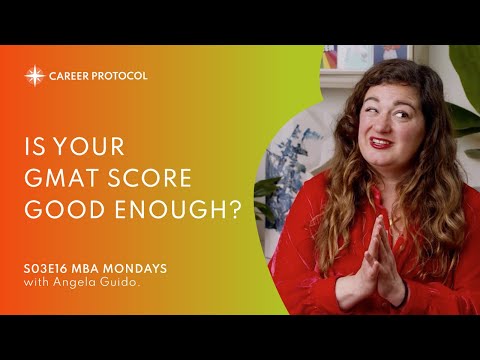 Is your GMAT or GRE score good enough? That is the question I'm going to help you answer today on MBA Monday. Welcome back! I'm Angela Guido, the founder of Career Protocol, a Career and MBA Coach, and a person who really wants you to get into the business school of your dreams. As it turns out, your test score is going to have a disproportionate share of that decision for you, which is why I'm talking about the question today of whether or not your test score is good enough. We've done quite a few videos on this channel about the GMAT and the GRE, but today I really want to get right to the heart of the question which is, is your score — whatever it is and whoever you are — good enough for the schools that you want to go to? This is an incredibly important question because what we found over the years is that a good GMAT score will not get you into business school. If you're not also qualified and passionate and a great person, the GMAT score alone is not going to overcome those weaknesses and get you into a great school, but if you are committed, accomplished, passionate, and a good person, a weak test score can limit your options. It can be the reason you are not admitted to a school that you would otherwise be a great fit for. So it's really important that you take those test scores seriously and that you do everything that you can do to maximize your score before you apply. But if you already have your score in hand, you're probably asking yourself, is this score, this one that I have, is it good enough? Can I stop now and apply, or do I need to take the test again? So I don't know who you are and I don't know what your test score is, but I'm going to explain to you the process you need to go through to answer this question for yourself.

First thing you need to understand is that the test score is serving two purposes in your application.

Go Check Out The Rankings

Okay, so now that we've discussed the role that the test score plays in your profile and how schools look at it, let's talk about how to decide if your score for you is good enough. First, you want to go to the rankings. Just pick your favorite rankings, almost all of them publish the school's average GMAT scores as part of the list, so just go to the rankings and look and see what is the average GMAT and GRE score at the schools that you're targeting. Is your score higher than the average test score at your target schools? Then you're probably in good shape. Is your test score lower than the average at your target schools? Then it may not be good enough. That's a very simplistic way to look at it. I'm going to add some more color commentary detail to it, but the bottom line is, if your test score is doing a little bit better than the average student at that school, chances are you're okay. And if it's below that, then chances are it's going to prove to be a weakness in your candidacy and if it's at all possible, you're going to want to try to get it higher than it is if it's currently below the average of your target schools.

How Competitive Is Your Demographic?

So you need to understand which demographic pools you're in and how competitive those pools are. If you're in a more competitive pool, such as management consultants such as men, you know who you are, figure this out for yourself, then you need to add at least 20 points to your GMAT score. Meaning if the school's average GMAT is 730 and you're from a really competitive demographic, then the average for you is going to be 750. It's going to be higher because there are more candidates like you. Schools can be pickier about who they admit for the chosen spots for that type of applicant. It's just very simply, there are more candidates competing for fewer spots, so that puts more pressure on the test score. In recent years, schools have really doubled down on all kinds of diversity. They're really starting to put their money where their mouth is and in our anecdotal experience, this means that people from competitive demographics, from competitive pools of applicants cannot afford weak test scores. They need every aspect of the application to be airtight. So if you're from a competitive demographic, consider adding 20 points to the school's average GMAT and calibrate yourself to that number. If you're from a rarer pool of applicants where there are fewer people like you in business school and applying to business school, then you can deduct 20 points and consider that that's the average that you are shooting for because there are fewer candidates like you competing for those spots, and that means they will take into account other aspects of your application and weigh them slightly more heavily than just the simple test score. This is, of course, a gross generalization. The bottom line is that you ideally want to have a test score that's above the average for all the schools that you're applying to and as long as you've still got juice in the tank, I recommend that you keep going, you keep trying. We're about to start publishing a series of videos by our MBA wizard and GMAT guru, Brian Birdwell, who's going to come onto our channel and tell you how to prepare for the GMAT and the GRE and to really knock it out of the park. He’s been teaching those tests for over 17 years. We used to work together at Manhattan Prep. He’s an amazing guy, so I hope you’ll come back and follow his advice on your test score.

But the bottom line is, no matter who you are, you really want to make sure that you get the best score that you can possibly get. Not everyone can get a 760 and that’s okay, not everyone has to. But you should not stop trying until you’re sure that you’ve gotten the very best score that you can personally get. You’ll kind of know what that is. You’ll know when you’ve maxed out your test score and at that point you can shift your attention to the application itself. Okay, maybe that was good news for you. Maybe that was bad news I wore a bright red shirt in case this was a grim topic. I hope it cheered you up a little bit. Regardless, give the test everything you’ve got. Don't let that one little three-digit number determine your future. If you end up not getting the score that you want to get it doesn't mean that you can't get into business school it just means that you're going to need to apply to a few more schools and ideally some slightly safer schools where your test score is at or above the average at those schools. That's the best way to make sure that you're able to get in somewhere even if your test score isn't in the upper echelons of test scores. But we're wishing you all the best. This video is important because you have to know the hard facts. The truth is the test score matters. More than it should. So, give it everything you've got, best of luck and I'll see you next week on MBA Monday!

Need GMAT prep tips? Our resident GMAT Wizard, Brian, is dishing out GMAT study guides, practice tests, and resources so you can be fully prepared for the big day!

Finally… a GRE-GMAT (and vice versa) conversion calculator that allows you to see the entire score range in one place! Check it out here and decide which test is right for you.

Look no further for ways to improve your GMAT score. We’ve got 3 expert tips for you to try when you take the exam, designed to help you work smarter, not harder!