Everyone wants to get into the best business school, but do MBA rankings from Forbes, Bloomberg or Poets & Quants really tell you the best MBA for you?

Angela Guido’s back with a bunch of MBA rankings for 2022 to discuss whether MBA rankings matter at all, what the best MBA programs in the US actually are, and whether you should care.

MBAmo! This little robot will let you know your odds of getting into business school vis-à-vis your statistics! 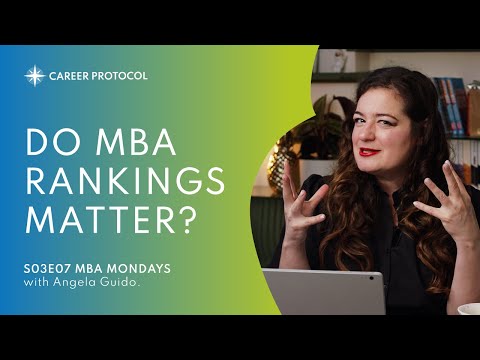 Hello, everyone. Welcome back to MBA Monday. I'm Angela Guido, the founder of Career Protocol, a Career and MBA Coach, and someone who is dedicated to helping you achieve your career dreams, whether that includes an MBA or not. But since I know so much stuff about MBA programs, I'm just vision it here on this channel every Monday. Today I'm talking about MBA rankings. What do they mean and do they matter?

It's really like you come out screaming and then it gets worse. All right. So to help you understand what the rankings mean and how to interpret them as you approach your MBA applications, I'm going to cover three things today, as I’m wont to do on this channel.

All right, let's look at how the various ranking agencies rank various MBA programs in 2022, 2021. Some of them released their updates at the end of the year. Some release their updates at the beginning of the year. I have in front of me the US News best business schools, who is ranking Stanford University Graduate School of Business number one. If I go to the Poets & Quants ranking again, we have Stanford GSB ranked number one. The Fortune ranking places Stanford at number two. And then we arrive… Sorry, I skipped Bloomberg Businessweek, that is also ranking Stanford number one. Stanford is looking pretty good so far. Then we moved to the Financial Times rankings that puts Stanford GSB at number six. Okay, so let's talk about this. All the different rankings agencies have a different formula by which they calculate where schools sit from one year to the next.

What Do MBA Rankings Mean?

The first thing you need to understand about rankings is that they are designed to sell advertising. Rankings consistently get among the highest traffic of any publications, articles or posts. It's sexy stuff. We like to quantify things. We like competition. We like to know where things stand. So the first thing you need to understand is that the intention of the rankings, while there is certainly an altruistic component to it, they're really not designed for you. They're designed for the people who publish the rankings. Number one.

Should MBA Rankings Matter To You?

Number two, when you look at the situation today, where Stanford is number one more or less across the board, except number six in one place, it really forces you to call into question, what do these rankings even really mean? And are they all that relevant to you? Like I said, every organization has its own algorithm, and the schools do move up and down from year-to-year. In fact, the best years for clicks is when a grad school like Stanford drops dramatically in the rankings. That's much more click-worthy than same old same old Stanford is doing great. So you should always kind of look at the rankings with a huge mountain of salt in terms of the specifics. So which school’s number one versus which school’s number five? These things are going to change from year to year and to some extent, it doesn't really matter because there is a general sense of agreement about which schools are the very best, which schools are the next best, which schools are in the next very elite still top category, and then kind of where’s everybody else. The overall position of schools in the buckets of echelons of quality and caliber and reputation doesn't really move much from year to year. But first, let me talk about what the rankings actually mean. And let me start by talking about what the rankings mean for schools. So as I said, there's a general agreement about who's at the top and who's next top and who's third top and who's everybody else. When a school that is lower in those echelons pops up into a higher rank, like, for example, Bloomberg Businessweek is ranking Dartmouth Tuck number two this year. I predict that Dartmouth is going to see an influx in applications this year because they're going to catch the attention of more people who are looking to apply the top programs and are now willing to take the program a little more seriously than they might have when it was ordinarily ranked number seven, number ten, number fifteen. Dartmouth Tuck is definitely one of the top schools, but it doesn't usually appear in the very top of people's consciousness. So the rankings are very important for schools because they know that the caliber and size of their applicant pool is reasonably correlated with where they rank in a given year. Now that's not to say that we're going to see meaningful drops, from your perspective, when a school is higher or lower in the rankings. Dartmouth is still getting a ton of quality applications every year, but this year they're probably going to see a little pop because they got ranked higher by Business Week.

So now let me talk about given that schools have to care about their rankings and they have a complex at best relationship with the rankings, what do they mean for you? So as you approach your MBA applications, you're probably thinking, I want to go to the very best school I can go to for me, and the very best school that I can go to for me is the number one school. Of course, we all want what's best for ourselves. So if you're going by that standard, you're going to have to either get into Stanford or Harvard, which is currently number one according to Fortune, or Wharton. By the way, those are the three schools that pretty much everybody agrees are kind of at the top. They're kind of the best and biggest three. Now, most people won't get in to Harvard, Stanford, and Wharton. So if you're applying to business school and you really feel like you need an MBA for any of the reasons I've talked about in my previous videos this season and previously on this channel, then you are probably going to have to apply to some schools that aren't in those top three. And that's because those top three schools, as you can imagine, are the very most competitive. And so even if you're a rock star candidate, there are no guarantees that you're going to get into those schools. So this brings me to how we actually use the rankings for our clients. We always want to make sure that our clients are getting into at least one MBA program that is going to help them fulfill their goals and ideally, the best ranked and most reputable school possible. So this is where, to be honest, the rankings do indicate to some extent the caliber and reputation of the program that you will graduate from. Why this matters is twofold. The stamp on your passport, as we call it, if you have Harvard MBA or Booth MBA or Dartmouth Tuck MBA on your resume, that sends a strong signal to anyone who looks at that resume that you can hang. That you've studied with the best, you got into a competitive program, you are ready to tackle the challenges of whatever role is coming at you and you’re a leader. So having a strong brand on your resume is absolutely a benefit to you. The second reason it matters is because of the caliber and size of the network. Now, we talk a lot about alumni and the importance of alumni networking in your application process, as well as once you graduate, and the quality, size, caliber, and attentiveness of the MBA networks at these schools varies widely. And this is a case where rank has some correlation with the benefit of the network. And there are other ways in which the rank doesn't necessarily correlate with the caliber of the network simply because of the different cultures among the different programs. Different alumni networks have different expectations in terms of how responsive and helpful they're going to be to each other. A topic for another video. But as we're thinking about the caliber of the school you get into, we really do believe that the rankings in general and again, these like echelons of schools, top, second top, third top, are of differentially higher value in this passport stamp aspects of MBA programs than the schools that are not as widely recognized to be reputable and amazing. And that means that as you're applying to business school, we really recommend that you start with the rankings as a launching off place to do your research.

How To Use Rankings To Make Great Decisions

So look at the schools that rank in the top 10, 15, 20, 30 for your geography and also worldwide, if you're looking to go internationally for your MBA, and then begin looking closely at those programs. You're going to need to calibrate your candidacy. These will be the strengths of the applicant pools at those programs and fortunately we have an amazing tool to help you do that. It's called MBAmo. The link is down below. He's a very cute little robot who will give you a 20-page report on your candidacy and how it stacks up against the school you pick and you can calibrate all of the top 30 US schools, your grades, scores, career experience, and how they match up with the expectations of the programs that you're targeting. So please go and use MBAmo, figure out where you stack up vis-à-vis schools you're applying to, vis-à-vis rankings, and that's how you'll begin to target your school list of matches, reaches, and safety schools. Schools where you're aiming high, schools where you feel like you're probably a pretty good match given your statistics, and then schools where your statistics are even a little bit stronger than the average admit to those programs, so that by the end of your MBA journey you're getting into at least one school and ideally more than one and ideally one of the very best schools from the standpoint of the school's reputation and the brand value which does, as I said, correlate reasonably well with the rankings overtime. Regardless, start with the rankings as you're launching-off point, calibrate yourself against schools, and then apply to a portfolio of schools that guarantees that you're going to get in somewhere but that you're also going to have a chance at the very best.

Check out the Ultimate Guide How to Get Into Business School

Get our Comprehensive MBA Career Report 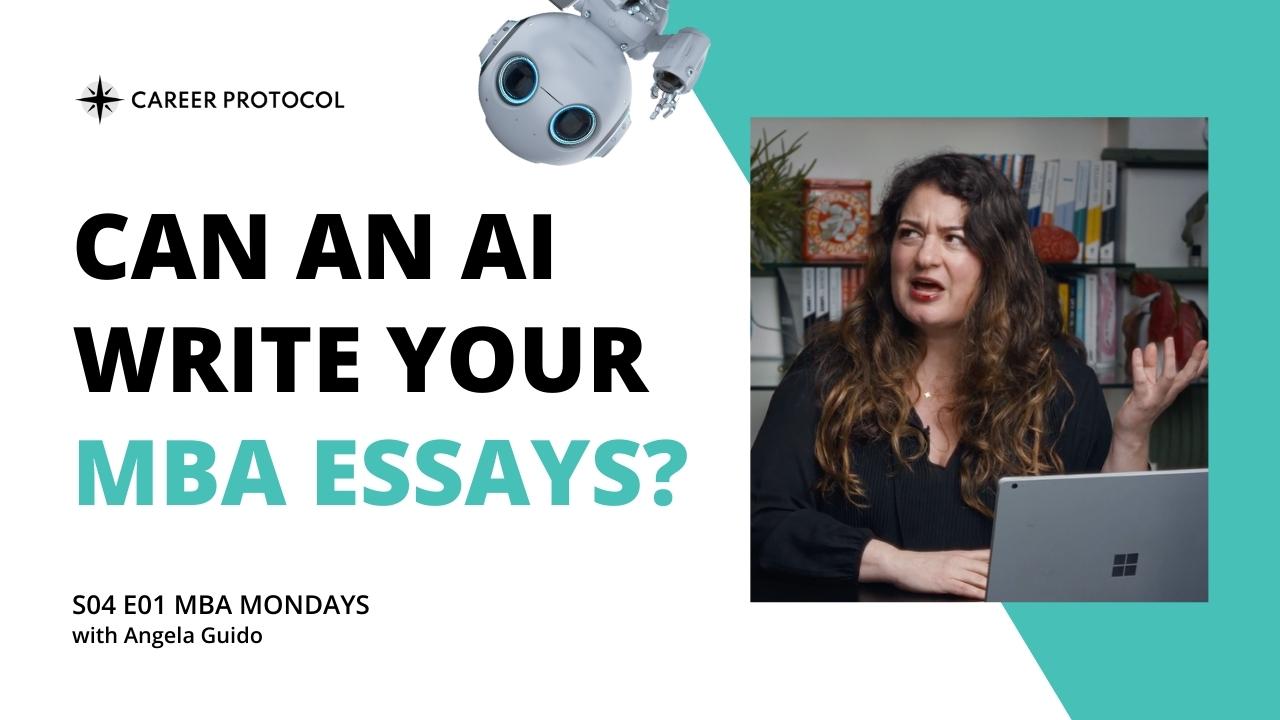