Listen here to find out how to gain access to any networking conversation without being an arse.

You already know to leave your agenda at home when networking.

Next week we will talk about how to introduce yourself to anyone without using a smarmy Elevator Speech.

But today, let’s tackle the dreaded Break In.

Exactly HOW do you break into a conversation already in process?

How do you elbow your way in as an outsider without stepping on toes?

How do you make a graceful entrance into a group already conversing?

There you are, milling around in a huge group, appetizers in hand, trying to find the important people, trying to connect, and trying to make a good impression on the people who can help your career while many other people are trying to do the same. It’s easy to feel powerless and overwhelmed in such moments.

Having a great way to introduce yourself when the time is right will give you confidence. But you can’t just barge into the conversation and announce yourself.

Have you ever seen people do that?

They stride into the circle and start giving their pitch? 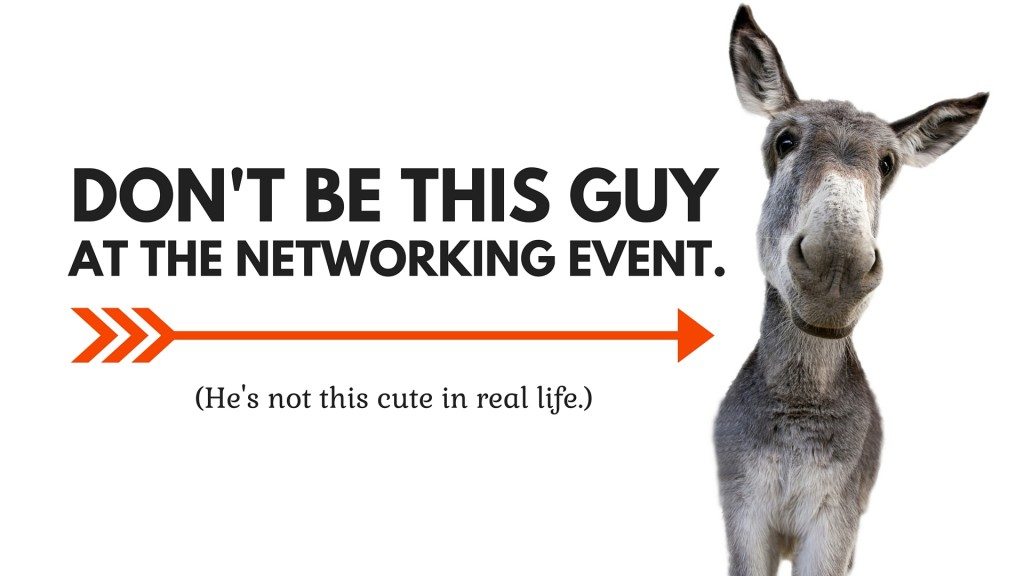 And everyone is looking at each other like “who IS this guy?”

Please, don't be that guy.

Keep in mind that networking events are not a pitchfest, they’re not a showroom floor where everyone is hawking their wares. Networking conversations are meant to be a dialogue, an ongoing discussion among a group of people who are all getting to know each other.

A networking conversation could last two minutes or two hours.

Your objective in networking interactions should not be to get in and out as fast as possible.

Instead, focus on bringing yourself fully into a dynamic conversation with others. This si what will make the strongest impression on everyone. And at a networking event, everyone matters. Don’t believe me? Ask Gary Vee. Love that guy.

When you are the newcomer to the group, it’s not your turn to introduce yourself. That time will come.

But it turns out that the best way to make a positive impression on a new group of people at a networking event isn’t to talk. Rather, it’s to listen.

Most people don’t think about the power of listening to build human connections when they are working a group at a networking event. But as it turns out, silence is more powerful than words.

Here is how to work a group through listening:

So if you help ignite someone else’s excitement about a personal passion, everyone will benefit, and that positive feeling will inherently be associated with you.

Vanessa is talking about a trip she took to Peru with her sister. She is describing a beautiful beach they visited that was very secluded and peaceful. She is brimming with enthusiasm. You can see that at least some of the things she is passionate about are family (or at least her relationship with her sister), travel, interacting with nature, and the experience of solitude and quiet.

When there is a natural pause, ask Vanessa a question that allows her to expand on a topic she is passionate about based on what you have just learned. Some examples based on her story…

Notice how all of these questions are completely open-ended, allow Vanessa to expand on her experience and something she loves, and maintain a level of social distance that doesn’t encroach into her personal life. “What does your sister do?” “How did you afford that trip?” “What does your family think about you taking a vacation with your sister?” would be too personal and inappropriate.

Notice also that these questions focus on Vanessa and don’t attempt to deflect attention off her and onto you. Some (negative) examples that would do that…

If you want to chime in and share your own experience, do that SECOND. AFTER you have helped Vanessa shine a bit more. But try leading with listening, because it respects the people already in dialogue, shows that you have a sense of humility and interest in others, and enables the speaker to come more alive, an experience we all love to have. So don’t forget the last and most important step:

Actually listen to what the person says. People know when you aren’t listening. They can tell when you are just waiting to talk. If you don’t listen, you will destroy all the good will you created by asking such an interesting question. So listen, pay attention, and follow the conversation wherever it goes from there!

We're giving away
a signed copy of Interview Hero!

Plus a 45-minute mock
interview with Angela.

We're giving away a copy of Interview Hero!

Plus a 45-minute mock interview with Angela.